Straddling the line between fall and winter, the month of October boasts beautiful scenic views, an abundance of seasonal activities, and, most importantly, Halloween. Halloween is the holiday in which consumers purchase a quarter of all the candy sold in the U.S. annually. It is a time when neighborhoods come together for trick-or-treating, costume parties, and story-telling. But where did we come up with the idea to ask our neighbors for candy, and why do we dress up in scary outfits? To understand much of what the modern Halloween celebration entails, we must also understand where it has its roots.

Halloween is thought to have originated from an ancient Celtic festival called Samhain (“sow-in”). November 1st marked the start of a new year for the Celts – the end of summer and harvest, and the beginning of a dark, cold winter. It was thought that on the night before the new year, October 31st, the boundary between the dead and the living blurred, and souls were able to wander the earth. Druids, ancient Celtic priests, would light massive bonfires, where people gathered to offer crops and animals as sacrifices to the Celtic deities for a safe and protected winter. 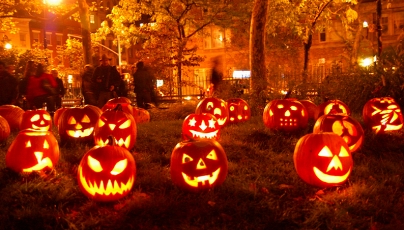 The Roman Empire conquered Celtic territory around 43 AD, and for several hundred years dominated those lands. Over the course of their rule, two Roman celebrations were combined with Samhain: Feralia, a day to commemorate the dead, and a day to honor Pomona, the Roman goddess of fruit – typically symbolized through an apple. This was incorporated into Samhain through the tradition of bobbing for apples – an activity still practiced today. By 1000 AD, the Church had dedicated November 1st as All Saints’ Day to honor the dead, which was celebrated in much of the same way as Samhain – big bonfires, parades, and dressing up. The night before this grand celebration was called “All-Hallows Eve”, and, eventually, “Halloween”.

During Samhain and All Saints’ Day, people would dress in costume and ask fellow townspeople for food. When the holiday came to America during Colonial times, a particularly American version began to emerge. It began as a public event that celebrated the harvest, where villagers would share ghost stories, tell each other’s fortunes, and get into all sorts of mischief-making. By the late 1800’s, Halloween became more about the community than about ghosts and pranks, as parents were encouraged to remove the “fright” out of Halloween celebrations. It was not until the mid-1900’s that the holiday again took a spooky turn. It was also around this time that Halloween became geared to younger crowds. 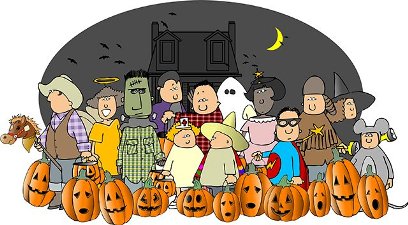 Today, Halloween is celebrated by all age and sizes, and with spooky stories, scary costumes, and yummy treats to boot.