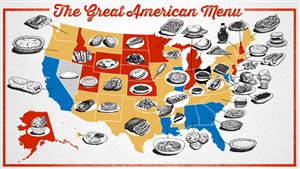 The United States is one of the most
culturally diverse countries in the world. Almost every single person
in the U.S. has a family history of immigration to the country and
the number of people from all over the world still coming to America
today is ever increasing. Due to this history of diversity, the
American cuisine covers a huge range of foods, from our Mexican
neighbors to the south to a vast number of variations with roots in
European cuisine and so much more. Over the years these influences
have had varying impacts on the cuisines of each region in the United
States. Such dishes with foreign roots have been varied region to
region to utilize the food resources of the area and have caused each
region to develop their own traditional cuisine over time. Often this
regional traditional food is overshadowed by the abundance and
notoriety of American fast food such as the McDonald’s hamburger or
the Pizza Hut pizza. To better depict the variety of traditional
American foods here is a list of some of the most well-known
traditional dishes from different regions of the United States. 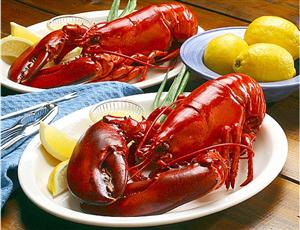 Boiled lobster is one of the
quintessential Northeast and New England cuisines. The state of Maine
alone accounts for 90% of the entire country’s lobster supply.
Traditionally boiled whole and alive it is eaten with butter or
lemon. A tourist favorite is a lobster roll which mixes the lobster
meat in mayo and is stuffed into a toasted hot dog roll. 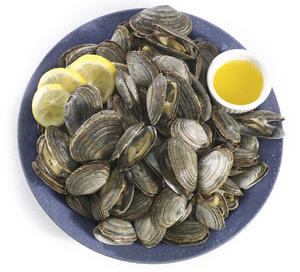 Various types of clams, mussels,
shrimp, and other shellfish are traditional to this region and
are typically cooked by boiling or frying. 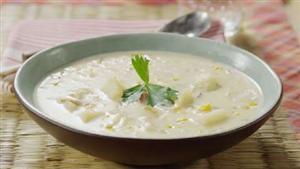 Chowder is a type of soup using any of
these seafoods or fish and uses a cream based broth, has potatoes and
onions, and often times pieces of bacon as well. 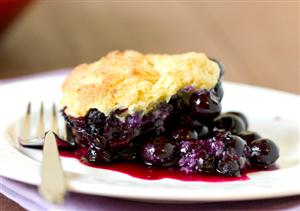 Blueberries are also a regional staple.
The most traditional way to cook these small berries is in a cobbler-
a variation on a traditional English dessert that does not use a
crust, but cooks the blueberries with a flour, sugar, and cinnamon
crusty top. 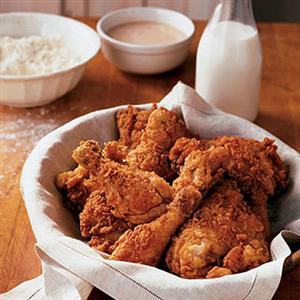 The south is the birthplace of the
fried food. Fried chicken hails from the south and has been perfected
through the art of frying in lard or shortening. A staple in any
southern cook’s handbook, fried chicken is covered in salt and
pepper, fried in a skillet, and served with gravy- a sauce using the
leftover chicken fat, cream, flour, and spices. 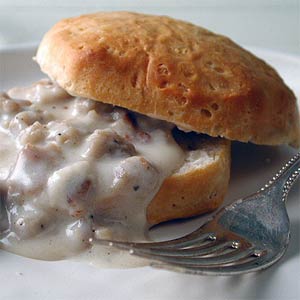 Biscuits are another southern classic.
Unlike British biscuit which are often thin and crunchy, southern
biscuits are light a fluffy and used to dip the traditional gravy
used for fried chicken and other dishes. 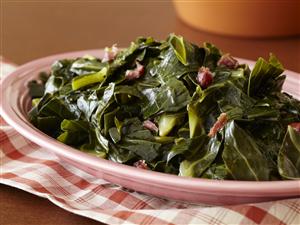 Collard Greens are a leafy vegetable
similar to kale or cabbage. A staple in the southern cuisine they are the state vegetable of South Carolina. Traditionally they are boiled with the ham hocks and served with the leftover
juices from the boiled concoction. 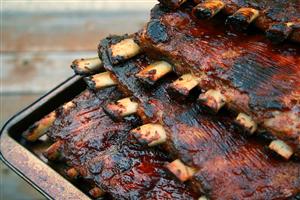 Barbecue or BBQ is
the quintessential plains/ southern food. Traditionally using pork,
the meat is slathered in BBQ sauce before, during, and after cooking. In the midwest this sauce is
typically made with a tomato, spices, and a vinegar base. The meat is
then slow cooked over a charcoal or wood fire (typically hickory
in the midwest) for a long period of time until the meat becomes
tender and juicy. 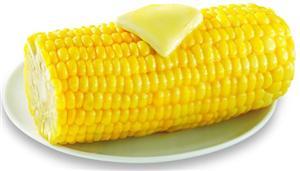 Corn is a staple
in the midwest and plain diet as the region is know for it’s
expansive farms and corn based agriculture. Corn on the cob is the
most traditional way to eat corn. The ears of corn are boiled whole
in water and then smothered in butter, salt and pepper and eaten
directly off the cob. 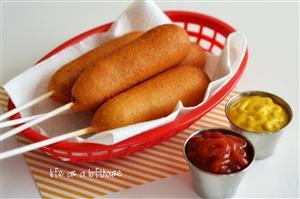 Corn dogs also
hail from this region of the United States. Hot dogs have their
origin in New York and are a type of sausage traditionally using the
leftovers from pork processing. In the midwest and plains region
these hot dogs are skewered on a stick and coated in a cornmeal
batter, then deep fried. 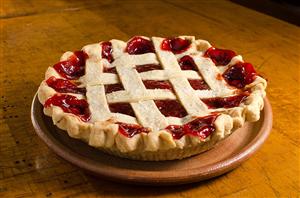 Cherries are
another regional favorite in the northern part of this area.
Traditionally they are cooked in a pie with a crust on bottom, cherry
filling, and then enclosed in a crust on top and baked until golden
brown. 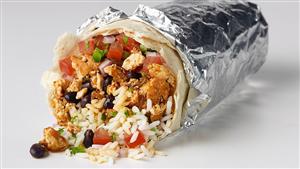 The cuisine of the
southwest of the United States has strong influence from their
Mexican neighbors. A southwest classic is the burrito. It uses the
traditional Mexican flour tortilla and is then filled with slow
cooked meat, beans, vegetables, and rice and rolled into a wrap form. 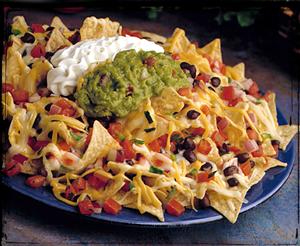 Nachos are another
southwest staple. Although the ingredients hail from Mexico, this
dish is not a Mexican development. Nachos are fried tortilla chips
that are coated in cheese and beans, vegetables, or meat, and then
placed in the oven to melt. 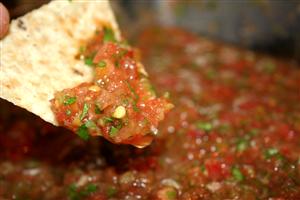 Salsa goes along
with many of the southwest dishes. Although it means “sauce” in
Spanish, in the U.S. it is a specific type of sauce using tomatoes, onions,
vinegar, cilantro, and jalapeños which are cooked or marinated together and
eaten on nachos, burritos, fajitas, and various other southwestern
dishes. 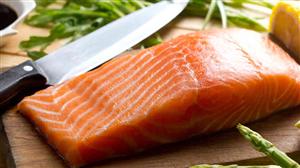 Salmon is a
favorite on the Pacific coast of the United States. Smoked, or
grilled it is eaten across the country, but nowhere more so than on
the west coast, the salmon’s native land. It is a staple on menus and
in households in the region. 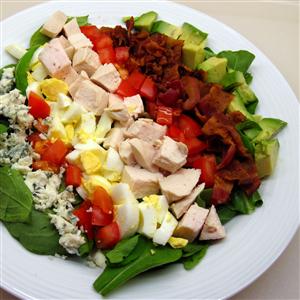 Cobb salad was
developed in California by a chef who, using leftover ingredients he
found in the kitchen, formed one of the best known American
salads today. A typical cobb salad starts with lettuce greens, then is
topped with hard-boiled egg, bacon, bleu cheese, tomatoes, and
avocado, with a dijon mustard and olive oil dressing. 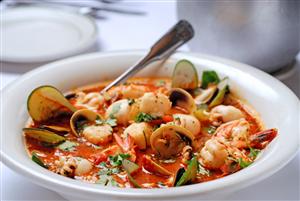 Cioppino is a
classic San Francisco dish with Italian roots. It has a soup base
using fish stock, tomato, onion, garlic, and parsley, and is then
filled with a variety of fish depending on the season. The most
typical fish used are shrimp, crab, and clams.

And for some of the recipes for these regional delicacies, click here!