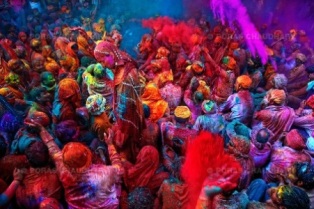 Originally an ancient Hindu festival celebrated in India, Holi is also known as the Festival of Colors and is now widely popular with non-Hindus and people all across South Asia. First and foremost this festival celebrates the beginning of a new season, spring, and the victory of good over evil. Hindus believe it is a time of enjoying spring’s abundant colors and saying farewell to winter. It also marks the beginning of a new year and a time to mend broken relationships and end conflicts to help start the year afresh. Celebrations for this festival begin the night before the actual day of color with the burning of a bonfire to symbolize an ancient myth of burning away evil spirits to make way for good fortune. On Holi day children and youths spray colored powdered solutions and throw colored powder at friends and strangers, men and women, poor and rich. Anyone and everyone is fair game. People move and visit family and friends, share Holi delicacies and chilled drinks, including an adult drink with special intoxicating herbs specific to this holiday. It is celebrated at the approach of the vernal equinox, on the full moon. This year March 17th will be the Holi day of colors. For a fun and informative video of the holiday click here!

Celebrated in almost every Spanish city, this holiday takes place during the last week of Lent, the last week immediately before Easter or Pascua, the day on which Jesus was resurrected after crucifixion.  Religious processions of brotherhoods and fraternities march through the Spanish streets throughout the week to commemorate the passion of Jesus Christ. These groups march wearing conical hoods and cloaks and carry candles, enormous wooden crosses, and magnificent floats, known as ‘Pasos’, sculpted with depictions of gospels relating to the Passion of Christ and the Virgin Mary. Religious devotion, art, color, and music combine in acts to commemorate Jesus Christ by the Spaniards as the cities gather to watch the processions through the streets. As an extremely Catholic country this week is an important spring event and draws in huge crowds of locals and tourists alike to take part in this uniquely somber cultural festival. This year the processions start on April 14th. Check out a cool video of the processions here. 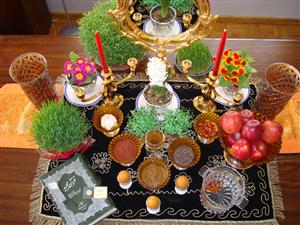 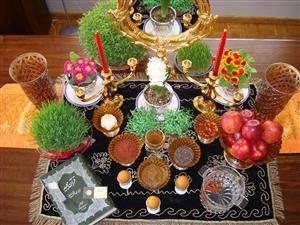 Nowruz marks the first day of spring and the first day of the New Year in the Persian calendar. As a secular holiday it is celebrated by a widely diverse group of people from various ethnic communities and religions and has been celebrated for over 3000 years. Originating in the territory formerly known as Persia, it is now celebrated in modern day Iran, Afghanistan, Uzbekistan, and Tajikistan. In most of these locations it is considered the most important holiday of the year and preparation start months before the spring equinox. Traditionally, a major spring-cleaning of the house and buying and dressing in new clothes starts the twelve day long festivities. During these days short house visits to friends, families, and neighbors is expected. Bonfires are common as they symbolize the burning away of the old year. The Haft Sin, or seven s’s are a traditional table setting during this time. A mirror symbolizing the sky, an apple symbolizing earth, candles symbolizing fire, rose water symbolizing water, wheat symbolizing plants, goldfish symbolizing animals, and an egg symbolizing humans and fertility are on each dining table. Traditional Nowruz specific dishes and desserts are eaten during this time. It is celebrated on the day of the astronomical Northward equinox, this year being on March 22nd.

Also known as Pesach, Passover is an important, biblically-derived Jewish festival. The Jewish people celebrate Passover as a commemoration of their liberation over 3,300 years ago by God from slavery in ancient Egypt. This festival usually lasts seven to eight days starting the night of the full moon after the northern vernal equinox. On the first night of Passover Jewish families come together for a special dinner called Seder and the table is set with the finest china and silverware as it is one of the most important Jewish holidays. During this meal the story of the Exodus from Egypt is told. Throughout the week all meals eaten must be Kosher and not use a leavening agent. This is to represent the Jewish flee from Egypt which is believed to have happened too quickly after liberation to allow time for their food to leaven before being lead away by Moses. Special meals specific to the festival are prepared throughout the week to accommodate for this such as matzo, a yeast-less bread product, and families gather together throughout the week to enjoy them together. Many Jews do not work on these days and special prayers are said specific to each night of the Passover festival. This year the festival begins on April 14th.

This Japanese holiday is also a celebration relating to the vernal equinox. This festival is mirrored in the autumn on the only other day of the year that there is exactly the same amount of hours of daylight as night.  Originally as a Shinto religious holiday people would spend this day by visiting loved ones gravesites and paying homage to the ancestors. Today, as a public holiday in Japan, most workers have this day off to return to their homes and celebrate with their families. The day is celebrated to bring in the spring season and appreciate nature blooming after a long winter. People also take time to renew their lives on this day by thoroughly cleaning their homes and making important life changes, such as graduating or starting a new hobby. Some families still visit grave sites to sweep off dust and debris and leave flowers or food offerings. This year the holiday falls on March 20th.

Have you taken part in any of these cultural celebrations? Are there other spring cultural events you’ve heard about? We want to know!