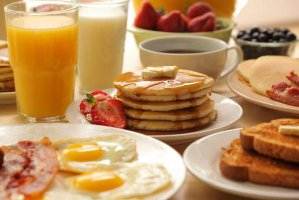 A “traditional” American breakfast
Breakfast is known as the most important meal of the day, and if you’re hard at work studying or experiencing American culture here in Boston, it’s good to start the day off with a full stomach! Just like any other meal, what is considered a “breakfast” food is different all over the world, and depending on your host family, they may serve a “traditional” American breakfast, or maybe a breakfast from their families home country. Even within a country, breakfast meals may be different. In the American South grits are popular, while in Boston you’re much more likely to have a bagel and cream cheese. Here are some examples of the standard breakfast in a few different countries. Have you tried them all? What are your favorites? Let us know!

In Australia, the typical breakfast consists of cold cereal and vegemite. Vegemite is a dark brown Australian food paste made from yeast extract. It is a spread for sandwiches, toast, crumpets and cracker biscuits as well as a filling for pastries. It is similar to British, New Zealand and South African Marmite, Australian Promite, Swiss Cenovis and German Hefeextrakt.

In Bogotá, Columbia, the traditional breakfast is changua, a milk, scallion, and egg soup. Changua is a mixture of equal amounts of water and milk is heated with a dash of salt. Once it comes to a boil, one egg per serving is cracked into the pot without breaking the yolk, and allowed to cook for about a minute while covered.

In Italy, the traditional breakfast is pretty sparse – usually just a cappuccino and hard roll or biscotti. Cappuccino is a coffee drink which is most often prepared with espresso, hot milk, and steamed-milk foam. The name comes from the Capuchin friars, referring to the color of their habits.
A traditional Turkish breakfast spread

In Turkey a traditional breakfast consists of bread, cheese, butter, olives, eggs, tomatoes, cucumbers, jam, honey, and kaymak. It can also include sucuk, a spicy Turkish sausage, and Turkish tea. Kaymak is a Turkish creamy dairy product, similar to clotted cream. It is made from the milk of water buffalo or of cows.

A traditional Japanese breakfast includes miso soup, steamed white rice, and Japanese pickles. Miso is a soup consisting of a stock called “dashi” into which softened miso paste is mixed. Many ingredients are added depending on regional and seasonal recipes, and personal preference.

An American breakfast varies widely from place to place, but typical options include eggs, pancakes, bacon, or cereal. Cereal can either be served hot as oatmeal or cold with milk.
sources: Business Insider, Wikipedia