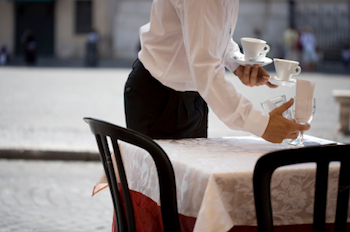 Tipping – American-style – is a concept that many visitors here in Boston are weary of. How much should I tip? Why do I tip this person, but not another? Can I ever not leave a tip? These are questions every foreign traveler asks, and to be honest it can all get a bit confusing! Here is a quick guide best navigate the end of your bill while you’re in Boston.

The reason tipping is so prominent in America is because many service based industries, most notably waiters, are paid a wage that is so low they rely on the customer to tip them. Servers in restaurants are paid below minimum wage, and although it varies state to state, it’s possible that your server is earning as little as $2.15 per hour! In Massachusetts it’s still only $2.63. Therefore they rely on their service skills like being helpful, courteous and attentive, and you, to make up the rest of their paycheck. There are a number of reasons restaurants pay their employees such low wages, but mostly it has to do with Americans cultural affinity for rewarding hard work. With any service industry the better you do your job the more money you will receive. In a high end restaurant a good server will make hundreds of dollars a night, a vast majority coming from tips.

You’re never required to tip, you’re expected to tip. If you feel the service was poor and you don’t want to reward their work, then don’t tip. However, you may have to explain yourself, either to your server or to their manager. Simply leaving a 10% tip, the bare minimum, is a good way of way of saying “your service was poor” and you are unlikely to be questioned.

Who and how much to tip?

In a restaurant the general rule is a good tip is 15-20% of the bill. Your tip depends on how good the service was and how much you think they deserve, bearing in mind that they are reliant on that tip for their paycheck. If your group at dinner is 8 people or more, most restaurants will require a 20% tip called a “gratuity” that’s added to the bill. In high end restaurants with a maitre’d or a car service, expect to give them a couple of dollars, again dependent on how helpful they were.

In a taxi the driver should be tip as a percentage of the fare, around 10-20%. They do rely on tips as a large portion of their paycheck and giving them less than 10% is impolite. Again it is acceptable to refuse a tip if they drove badly or ignored your requests but if they got you where you needed to go and were friendly about it, give them 20%.

Hairdressers, shoe shiners, porters, deliverymen and doormen are some service jobs that you don’t use very often, but should be tipped when you do. It’s all dependent on their level of service but expect to give them around $5. If it’s a large bill it’s better to give them a percentage of the total, again around 15-20%.

A bartender is very reliant on tips for a paycheck and not tipping them may mean you’ll have a long wait until they serve your next drink.  If you tip them well, however, expect quick service. Most people tip $1 or $2 per drink.

Most people don’t tip for “over the counter” service in places like coffee bars, fast food restaurants or corner stores. Some may have a “tips jar” with a couple of $1 in it, but you shouldn’t feel obligated to tip unless the person was exceptionally helpful.

It’s good to have $1 on hand so you can give your taxi driver $4 on your $20 cab ride or $7 to your server for your $36 meal. It’s also good to round up. 72 cents isn’t that much but can add up to your server over the course of their workday and leaving change for a tip can be insulting. As you become used to the concept of tipping you’ll begin to notice many places charge a certain amount so giving a tip is easier. A haircut may be advertised for $16 so you just give them a $20, or a drink might cost $3.50 so you give your bartender a $5.

The most important thing to remember about tipping is that it’s entirely dependent on how good you thought the service was. If you thought it was so bad they don’t deserve a tip, be ready to explain why. But remember, it’s impolite to not tip unless you have a good reason. Calculating a tip can be awkward at first, but it’s part of American culture and should be embraced! You never know, maybe you’ll get a free drink or a complimentary dessert if you’re a generous tipper.

If tipping and American manners confuses or interests you, look at Emily Post, a time honored institution that defines American etiquette.  And remember, share your tipping experiences or stories with Global Immersions!